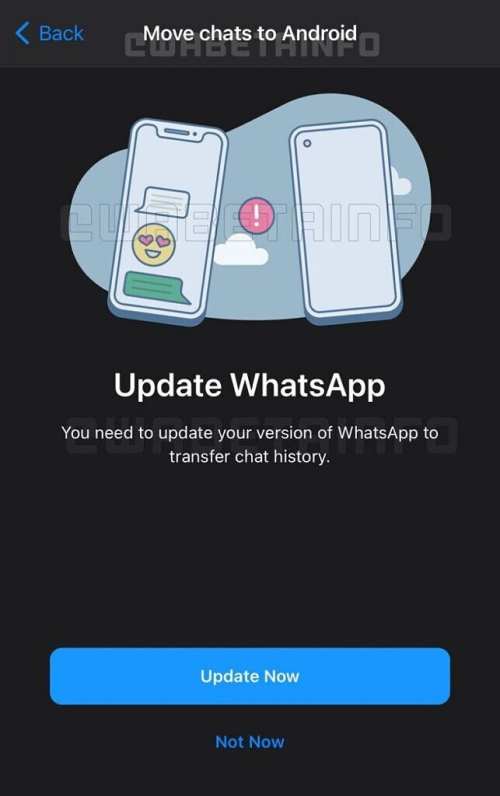 The multi-device support on Whatsapp will let the users to send and receive messages from any of your devices like tablets, PCs, or phones. According to WABetaInfo, the company is testing a new chat history migration feature that will be out in a future update. They have shared a screenshot of WhatsApp for iOS that says move your chat history to an Android device, for that you need to update the app to the latest version.

As per the reports, when the user tries to link a device of a different OS, you need to update the app to the latest version available on the App Store or TestFlight. You need to do this to avoid any error with the Android version.

However, it is yet not clear on the availability of the function nor on when the multi-device support launch. Last year, WABetaInfo reported about a Whatsapp feature is in development that will sync chat history on the platforms.

Using the same Whatsapp account on multiple devices is the most requested feature by the users. So, let’s see when the multi-device support will be rolling out.

At present, the user can take back up of Whatsapp chat history to the cloud, and there is no official way to transfer Whatsapp chats between iOS and Android. Normally, we can easily back up the data and the chat history is kept on the phone, as we cannot move it from one OS to another OS device. But, soon we might be getting an official method of migrating chat history.

For the past few months, Whatsapp is working on many other features like Web app has received support for Audio and video calls, new wallpaper option, self-destructing image, disappearing messages, and more. Meanwhile, Whatsapp has faced a lot of criticism on its privacy policy changes because of which many users switched to the Signal app.