After so many rumors, finally, the OnePlus 9 series is officially launched at a virtual event on Tuesday. Few of the rumor news is correct like the new smartphone will have cameras of Hasselblad brand. At the launch event, three smartphones and one Smartwatch was announced. OnePlus 9, OnePlus 9 Pro, and OnePlus 9R. Let us check out the confirmed specifications of the devices. 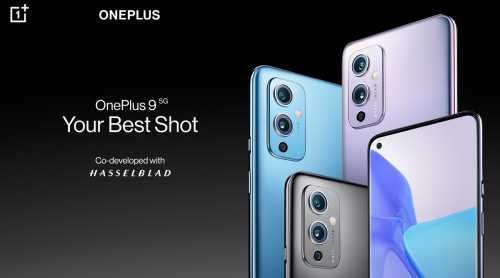 OnePlus 9 5G will be priced at Rs.49,999 for 8GB RAM and 128GB storage variant. And the other variant with 12GB RAM and 256GB storage price will be around Rs.54,999. The smartphone will run on Android 11 with OxygenOS 11. It has a 6.55-inch full HD+ AMOLED display protected by a 3D Corning Gorilla Glass. The device is powered by the octa-core Qualcomm Snapdragon 888 SoC. Moreover, it also has a multi-layered cooling system called OnePlus Cool Play.

While talking about cameras, it has a triple rear camera setup that has 48-MP Sony IMX689 primary sensor. The camera setup is like a 50-MP Sony IMX766 secondary sensor with an ultra-wide-angle f/2.2 Freeform lens. The front camera is of 16MP Sony IMX471 with an f/2.4 lens.

In the connectivity options, it has 5G, 4G LTE, Wi-Fi 6, Bluetooth 5.2, GPS/ A-GPS, NFC, and a USB Type-C port. It has an in-display fingerprint sensor. OnePlus 9 is powered by a 4,500mAh battery that supports fast charging. There are dual stereo speakers with Dolby Atmos Support.

OnePlus 9 Pro runs on OxygenOS 11 and it comes with a 6.7-inch QHD+ display. It also has Hyper Touch support that increases the touch-responsive rate to 360Hz. OnePlus Cool Play is built on the heat dissipation design along with a large vapor chamber.

The price starts at Rs 39,999 for 8GB RAM. OnePlus 9R runs on Android 11 with OxygenOS 11. The device has a 6.5-inch full-HD+ OLED display. It is powered by Qualcomm Snapdragon 870 SoC and comes with 8GB RAM and 128GB storage. There is a quad rear camera setup and is packed with a 4,500mAh battery with fast charging. The pre-orders of the phone will start in early April.

You can buy the OnePlus 9 series from the OnePlus.in, Amazon.in, all OnePlus exclusive offline stores.